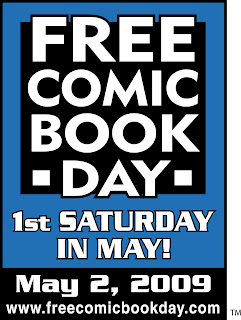 May 2, this year, is Free Comic Book Day! Honestmonkey is so stoked! He's not sure exactly why, but he loves FCBD. And so should you. Hey! Free comic books! What's not to like?
Posted by Honestmonkey at 2:16 PM No comments:

Honestmonkey cannot see this movie with any eyes but those that have already read the novel. Through that filter, the movie is just fantastic. They changed enough that had you not read the novel, reading it now would still give surprises, and a bit different ending. Snyder did a fantastic job, the actors were great, this movie is epic. There were numerous references to the book, homages to specific pages or scenes.

That said, as others have said, it is a bit confusing if you didn't already have some idea as to what was going on. Major plot points occasionally pass by a bit too quickly. One thing which is kind of the entire impetus for the story is explained only in voice-over. And the movie tries to explain something that in the novel was not really explainable other than being a human foible.

Note that there are a lot of flashbacks, that is how the story is told. That might help in understanding what is going on a bit. HM saw it with a crowd of mostly comic book nerds, which was fun in itself.

The movie is violent and intense. But it’s a good story told well. Can’t wait for the DVD.
Posted by Honestmonkey at 9:11 AM No comments: