Nice Guys and Jerks at the Con

Most of the people I came across while in San Diego at ComicCon were nice, friendly folk. If they were running around in costume, they were almost always happy to pose, often willing to make sure HM got a good shot. If they were “talent”, they were happy to see their fans, happy to sign books or pictures or whatnot if you had something to sign, happy to talk with you for a bit.

For example, Eddie McClintock (from Warehouse 13) was very happy to interact with fans. He and some other cast members came to watch the Eureka/Warehouse 13 preview, and he took a number of photos with people. He was always smiling and seemed genuinely thrilled to be there. This was the general sentiment for most of the “talent” that Honest Monkey saw.

HM happened to run across Gene Simmons in Café Diem at the Hard Rock Hotel. Asking very politely if HM could take a picture, Mr. Simmons said “Sure” and posed. Snapped off a quick picture and thanked him. HM imagines that Mr. Simmons is fairly used to this, having been in the business for 35+ years.

However, there are always exceptions, of course. Here are a few that happened to Honest Monkey.

Saw Jim Steranko (Wikipedia) at a booth selling his books. Was going to take a picture, but Mr. Steranko and someone there with him noticed and both held out their hands, blocking their faces. Now, this is of course their right. He doesn’t have to let people photograph him, and he can attempt to stop people doing so. But then, why was he there? Did he think HM would buy a picture if he couldn’t take one? “I’m going out in public to see my fans but DON’T LOOK AT ME! I CHARGE FOR THAT!” Whatever. HM was a little upset, but the picture he would have taken would have looked a lot like the one from the Wikipedia article. Steranko was wearing the same clothes, even. So no loss.

Tyrese Gibson (who himself seemed like a nice guy what HM saw of him) was at the Con, at some booth, with a long line to see him to get an autograph. HM has no idea who Tyrese Gibson is or what he does, but he seemed happy, and was signing things from fans, apparently famous, so HM’s camera goes up and tries to take a picture. A “guard” with Mr. Gibson waves a hand in from of HM saying “No Pictures!” What? Okay, fine, HM doesn’t have a clue who the guy is anyway, and the picture is a bit blurry, so HM deletes it in a bit of a huff and wanders off. Note however, that Mr. Gibson wasn’t as much of a jerk as his “guard”. The same time the “guard” was being gruff, Gibson said that no, really, it was fine if people wanted to take pictures of him, but by this time HM no longer cared and left the scene. HM wishes Tyrese all the luck, but needs to pick better assistants. 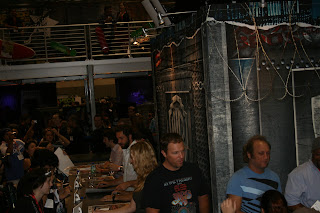 The only other people that were sometimes rude (that HM came across) were the “Elite”. These are people that try to keep things running smoothly, and they have a tough job, since there are thousands of people milling around. Sometimes, something happens at a booth in the Exhibition Hall, and a crowd forms. The Elite come along and yell at people to keep moving. At one point, HM was watching a video on a screen above a booth, and was told he couldn’t stand there. Why the hell did they allow video screens at booths if you weren’t allowed to stick around and watch them? A big crowd developed when the cast from “Chuck” showed up at the Warner Bros. booth. The Elite tried to get the crowd moving – “One picture then move along!” – but was ignored for the most part. The few hundred people there were not moving. HM supposes it would have been more fair to everyone involved if the crowd had kept moving (and perhaps less of a fire hazard), as he had a hard time getting any good pictures. But crowds and fan worship being what it is, he didn’t expect that to happen.

For the most part, the Elite were fine. They had a few odd rules which made little since, but nothing really overt. HM didn’t understand the one about making sure your badge showed on entering the Exhibition Hall, as he was already in the building, and presumably had shown his badge to get in. Are there badges that don’t include the Exhibition Hall?

The people that were working for ComicCon were generally very helpful and friendly and knew how to run things. HM never had a problem with them.

One supposes that given the large crowds, there are going to be a few “bad apples” or communications breakdowns. HM is not sure why someone would show up if they weren’t there to greet their fans instead of pissing them off.
Posted by Honestmonkey at 12:06 PM No comments:

Sunday morning - was going to check bag at the Con, but the bag-check guy was searching through all the bags. Not sure why, or what they were hoping to find. Not sure why they thought violating privacy like that was okay. Went over to the HardRock hotel and they were happy to check the bag without a search. Ate breakfast at Cafe Diem; good, if a tad expensive.

Saw "The Human Target" pilot last night. Not bad, but suffering from 'TV-itis'. Tried hard not to be "comic-booky", and succeded. Instead it had a number of the clichés that action shows have. The main problem with the concept is that the character is supposed to blend in, yet by virtue of him being the main character, we are watching him the whole time.

Not much going on at the con today that HM wants to see. It's kids day, mostly.
Posted by Honestmonkey at 11:10 AM No comments:

Just sat through a preview of "The Vampire Diaries". They threw every single cliche into it that was possible. It was about as awful as HM imagined it would be. Hopefully the Mythbusters panel will make up for it.
Posted by Honestmonkey at 7:03 PM No comments:

Twitter is not working for unknown reasons again. Trying this instead.

Had to dump a bunch of "freebies" a bit ago, really weighing HM down. Much better now.

Planning on staying in this room for the next 3 panels, to avoid having to wait in any more lines. We'll see how that goes. This will be the "Human Target" pilot.
Posted by Honestmonkey at 4:31 PM No comments:

HM is in the "Eureka" panel. It's a fun panel. They called Collin Ferguson who was in Bulgeria, at 1am. We all sang Happy Birthday to him over the phone. They are going to have a 4th season, which the crowd was happy about.
Posted by Honestmonkey at 4:00 PM No comments:

In a panel - "Science Fiction that will change your life". Waiting for it to start. The lines to wait in the lines are miles long. Probably won't wait in too many. This panel not very crowded. There seem to be a trillion people here at the Con. Last time HM was here (2007) there was only a billion.
Posted by Honestmonkey at 9:57 AM No comments:

Am posting this from my Nokia 770. It is kind of a pain, because the 770 is slow, has an on-screen keyboard, and just fails sometimes for no apparent reason. HM was hoping to 'tweet' from it, since he's going to ComicCon this week. If this works, HM'll just use this instead, as Twitter doesn't work.
Posted by Honestmonkey at 8:48 AM No comments: